In this review of Marauders #9, I express my feelings on this plot and the art. You know, I’m going to be upfront and say I don’t know what I read.http://https://youtu.be/dh39zBjCPig

In this review of X-Men Red #9, So Vulcan finally blew up and wants his stuff back. He’s really going full OJ now, huh? This book was whirlwind and the ending……. Ooooooohttp://https://youtu.be/Lk71FmoBhP4

In this review of Immortal X-Men #9, we get Shadowcat as the POV and I am here for it! I have thoughts on this….http://https://youtu.be/PQsyFDLW8T8

In this review of the debut(continuation) Chris Claremont’s 2001-04 X-Treme X-Men run. This book made me feel a certain way and yeah.http://https://youtu.be/m-gdKwnxMkM 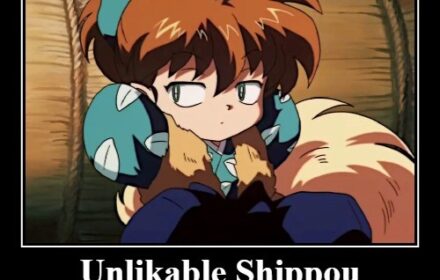 This screenshot demotivational poster is highly, utterly, indubitably, and absolutely Anti-Shippou. Sit back, relax, and open your minds to understand why this pathetic turd is not only unlikeable but also reprehensible. I can definitely hear the people, most specifically the triggered Shippou fans and defenders, in the comments going “This guy hates Shippou waaaaahhhh!!!!!”, “Shippou is only a fictional character waaaahhhh!!!!!”, and my personal favorite “He’s a child-hater waaaaahhhhh!!!!!!” So, does that mean I have to empathize with him? No, because he is a despicable little turd with an equally horrible attitude. Furthermore, do not even give me that excuse that Shippou will grow out of his ways because from what the original show, The Final Act, and Yashahime have demonstrated, this despicable little turd never changed. What is worse is that Shippou has not once demonstrated any form of gratitude or respect towards Inuyasha who has saved him multiple times and has never understood how painful it was for him to lose Kikyou, who he swore to protect, despite her wanting him to be a full human for her. There were several occasions where Shippou deserved those punches to the head by Inuyasha because he could never respect his boundaries and chooses to be nothing more than a vindictively mean-spirited pain in the behind. I am aware that it is a challenge to write tagalong kid characters in terms of making them appealing, charming, and, of course, likable. I am also aware that it is a challenge to try to make tagalong kid characters far more useful than they are and can stand toe-to-toe with their older companions and surrogate family. However, Shippou is one example of what wasted potential and being painfully grating feel like. He barely takes responsibility for his words and actions and always expects to be coddled by Kagome, despite him being in the wrong nearly most of the time. It also does not help that his smug attitude and his bratty petulance come off as charmless and devoid of any lovability let alone compassion. There was not one moment where I felt sorry or bad for him because his actions and words reflect how much of an insufferably pathetic douchebag he is. Furthermore, his cowardice to try to fight in battle is off the charts. Every time he tries to fight, this little turd just runs away like the pathetic loser that he is all while being a pathetic smug bastard towards Inuyasha who is stronger than he will ever be. His unlikability also extends to him having a rotten personality. I know children are not at their most wonderful when they are young, but Shippou’s rotten and smug attitude shows how much needlessly cruel he is. For instance, he does not show concern for Inuyasha when he does all the work to work on his Tessaiga or when he has to fight tooth and nail to retrieve ingredients to cure Kagome from her cold. I also know that Inuyasha cannot stand it when Shippou bothers him or peeves him, but he had every right to make Shippou realize that there are some boundaries he should never cross. Even when Inuyasha was brutally honest about how Kagome approached him when she kissed him in Movie 2, Shippou still had the nerve to think that Inuyasha was not fully grown up, thus making me affirm that this turd-hole has no business in lecturing him when he himself is not mature either. Perhaps what is more depressing about Shippou is that his smugness as a full fox Yokai makes him think he is above Inuyasha being a dog Hanyo but is just all talk and barely action. To say that Shippou is unlikable is a mere understatement. He is a deplorable little shit stain who deserves none of my compassion and all of my wrath. His smugness towards Inuyasha is insufferable and has crossed the line one too many times to the point where he never learns his lesson. The excuse of him being a tagalong child is so overdone to the point where it is impossible to not only dislike him but feel disappointed in his lack of character growth let alone growing compassion. His smugness, smart mouth, and antics towards Inuyasha were never hilarious and served to only aggravate me and hope that this little crap-head ends up being thrown off a cliff just like what Heihachi Mishima did to Kazuya Mishima from Tekken. The catch is Shippou is stripped of his fox magic for abusing them and not being useful in battle, thus making him fully deserving of that great big drop down the cliff because that is the punishment he deserves. At the end of the day, Shippou is a loser who I will gladly eviscerate again and again. I hope you all enjoyed this, and I will see you in the next submission. Take care, stay safe, and never be unlikable like Shippou is, everybody. The Lousy, Badmouthing, and Horrid Jackass from Inuyasha belongs to Rumiko Takahashi and Sunrise. 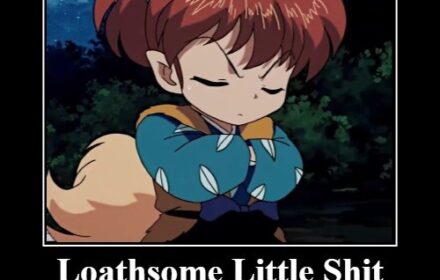 This screenshot demotivational poster is highly, utterly, indubitably, and absolutely Anti-Shippou. Sit back, relax, and revel in the unbridled yet deserved rage I have for this pathetic pinhead. Before any of you Shippou fans, defenders, devotees, and admirers go all out and proclaim that I am heartlessly bashing a little kid for no reason, please hear me out before you get all riled up and upset. Shippou’s behavior throughout the course of the Inuyasha series was never excusable. I am aware that he was a child who lost his father, but the fact that he lacked any gratitude to Inuyasha for avenging his father’s death from Hiten and Manten aka The Thunder Brothers just shows me that this little turd is not worthy of my respect or compassion. He is more worthy of my rage and disapproval because of how loathsomely horrid he has been towards Inuyasha and thinks he is above him just because he is a Kitsune or full fox demon. Aside from his tricks which fail on more than one occasion, he is not really a strong fighter and has to rely on Inuyasha’s strength to save him. Even when Inuyasha saves him and his loser “companions” nearly every single time, Shippou still shows ingratitude and vindictiveness towards him. Therefore, I am not sorry when I say that this pathetic turd should be chopped into pieces. Back then when I was in my young teenage years of 13 to 14 years old in middle school about to make it to high school, I really did try to like Shippou as a character. He seemed crafty and fun-loving, and he had moments where he can develop his skills as a fighter, as evidenced in his scrap with Gon, Bun, and Ken in Episode 88. However, as I watched him more critically, I learned to accept that Shippou was nothing more than a pathetic, self-absorbed, loathsome, and putrid ingrate. I am aware that Inuyasha is rough on him on multiple occasions, but that is because Shippou cannot keep his big mouth shut when it comes to Inuyasha’s weaknesses, troubles, and issues he has had growing up. Furthermore, Shippou was not careful of the arena he found himself in when it came to Inuyasha’s difficult and tragic past with Kikyou, which he was not over with and still haunts him. What is worse is that Shippou chooses to side with Kagome and her pathetic feelings, instead of understanding where Inuyasha came from. But no. Shippou was just nothing more than a cowardly loser lacking in empathy and understanding. Speaking of Shippou’s big mouth, that is another issue I had with this dastardly turd hole. He can talk the talk all he wants, but he barely walks the walk when it comes to using his powers let alone developing them. All his fox magic is good for is overpowering weaker enemies and not helping out his allies in the grander scheme of things. Once again, the excuse of him being just a child is completely null and void with me. Compare Shippou to other kid characters who can fight well such as Chibiusa from the Sailor Moon franchise, Amy from the Soul Calibur franchise, Ed from Cowboy Bebop, and Cody from The Rescuers Down Under and you will realize just how much Shippou fails. Shippou may seem resourceful and clever, but he abuses that cleverness at Inuyasha’s expense and his own gratification. There were even occasions where he lets out his big mouth at inopportune moments and is a risk to Inuyasha’s well-being whenever he finds himself in battle, specifically when it came to his battle with Kagura. If I were Shippou, I would have just known when to keep my big mouth shut for good and for all. Shippou’s horrible attitude just makes me want to scream at him in all of my wraths because of how maltreats Inuyasha and thinks he is above everybody when he is nothing more than a pathetic loser. For somebody like him who has the potential to improve his fox magic and tricks in battle, this turdy excuse of a Kitsune is ultimately pathetic and has all of my pity. His vindictiveness towards Inuyasha has always been grating, and he has done nothing but annoyance and condescension towards him, thus making me want to impale Shippou with a spear on his back and chop him with a cleaver. When it comes to Inuyasha’s tragic past with Kikyou, Shippou does not empathize with him, for he himself dealt with loss, and only sides with Kagome because her pathetic feelings seem to be more important than what Inuyasha endured. Worst of all, Shippou is barely reliable in battle, as his big mouth compensates for what little strength and skill he has with his poor excuse of fox magic. If ever I can brand somebody as the biggest loser bastard of all time, it has to be Shippou. Bar none. I hope you all enjoyed this, and I will see you in the next submission. Take care, stay safe, and never be as loathsome as Shippou, everybody. The Lousy, Badmouthing, and Horrid Jackass from Inuyasha belongs to Rumiko Takahashi and Sunrise.