Ladies, gentlemen, and Rowdyruff Boys and Powerpuff Girls fans of all ages. I present to you one of the members of the Team Xtreme Next-Gen’s rogues’ gallery. I am, of course, talking about one of HIM’s incarnations, the foul-mouthed, cruel, mean-spirited, condescending, ruthless, psychotic, and sociopathic Caruella Brana DeVile. She is a demoness who attacks her opponents with her massively towering size, her spiked tail, her durable and sharp tusks, horns, claws, and fangs, and, most of all, her ability to hurl out the most hateful, cruel, and nastiest insults with her poisonous, acid-dripping viper’s tongue, thus attempting to weaken all of her opponents with this most powerful weapon, especially her most hated foes the new generation of Team Xtreme heroes and heroines.
It has been a long time in the making since I wanted to design some monsters for all of the Blossoomer, Brickercup, Butchubbles, Blossutch, and Boomubbles children to fight against because having to have the children fight against the old rogues’ gallery i.e. HIM, Mojo Jojo, Major Man, Sedusa, Femme Fatale and many others would be really repetitive. Moreover, thanks to Matt aka KingShisa08 whose Godzilla Reborn fan art series and amazing creature designs have given me so much inspiration throughout the years, I thought it would be fun to design one of the many monsters that the next generation of Ruffs and Puffs will fight against.
As one can tell, HIM is essentially akin to Naraku in my Team Xtreme headcanon and he does not need any life partner to “bear his children”. HIM does this by creating minions from his own essence, specifically through forming his offspring from his clumps of flesh, and the evil aura that surrounds him. From there, he creates Caruella the condescending demoness with a foul mouth and a bad attitude, Obnoxia the spoiled brat of a demoness who loves to manipulate those around her and who craves for lechon 24/7, Ignorania the ignorant demoness who shows little to no regard of her own actions and always defends her siblings in the most haughty way, and Saculus the lazy demon who does not like to sully his own hands while being full of slander.
The idea of making this particular spawn of HIM was inspired by my former High School bully who made my life a living Hell from second year to fourth year High School. The instances where she called me a “fail at life” and “fail”, acted like such an instigator, acted abusively and in a mean-spirited manner towards me while she was being so nice to almost everyone else, acted really condescendingly when I showed concern, cheered on some of my former batch-mates to yell and get angry at me by saying “Idol (insert person’s name)”, recounted that one incident in our Filipino spoken choir practice where she accused me of calling one of my colleagues an “asshole” when I was actually so pressured and feeling frantic because I did not want to pay another late fee, which also did not help considering that I did not have any cash to do so and broke down, laughed at the time I slipped and fell when I was rushing to get to my classmates’ class photo day, and sneered at me during retreat in my final year of High School, thus refusing my friendship even when I tried being really kind and nice to her, that all happened to me. Ergo, she was a really cruel, cantankerous, two-faced, bad-tempered bitch who took pleasure in making my life as miserable as possible.
So, I thought it would be therapeutic if I took all of those bad memories I had with She-Who-Must-Not-Be-Named and do something creative by coming up with a concept for a monster who could be a recurring villain in the Team Xtreme universe. What better character to “give birth” to this hell-spawn than the flamboyant master of darkness HIM who has been messing with Team Xtreme since 1998. Sure, the thought of She-Who-Must-Not-Be-Named still disgusts me to this day even if I am far away from her and have no plans of being friends with her anymore, thus blocking her out of my life. In spite of that, at least still really fun making this wonderfully ruthless creature out of all the hellish experiences I had with her.
In conclusion, I have one final message for She-Who-Must-Not-Be-Named. Even though you made my life from Level 10 to Level 12 a living Hell by being such an aggressively incurable and ruthless bitch, even if I can never forgive you for calling me a “fail” or a “fail at life” and even giving me that deadly stink-eye during retreat, even if I can never forgive you for recounting that painful memory in one Sabayang Pagbigkas practice where you accused me of calling one of my colleagues an asshole when in actuality I was in so much stress and anxiety from the fear of paying a late fee, I just want to thank you for providing me with a lot of inspiration. I do not have to bow down to your nastiness and I can find solace in turning all of those shitty moments into things that are worth creating, thus channeling all of the necessary creative energy I have to create monsters and villains that act just as two-faced, rude, ruthless, cruel, and abusive as you were. You are most welcome, you delightfully awful, ruthless witch bitch. You may be out of my life, which is for the best, but I can surely churn out all of the mean things you did and let them be reincarnated into some of my OCs.
I hope you all enjoyed this look into my OC and I will see you in my next submission. Take care, everybody.
The Rowdyruff Boys and The Powerpuff Girls belong to Craig McCracken and Cartoon Network.
Caruella Brana DeVile belongs to me. 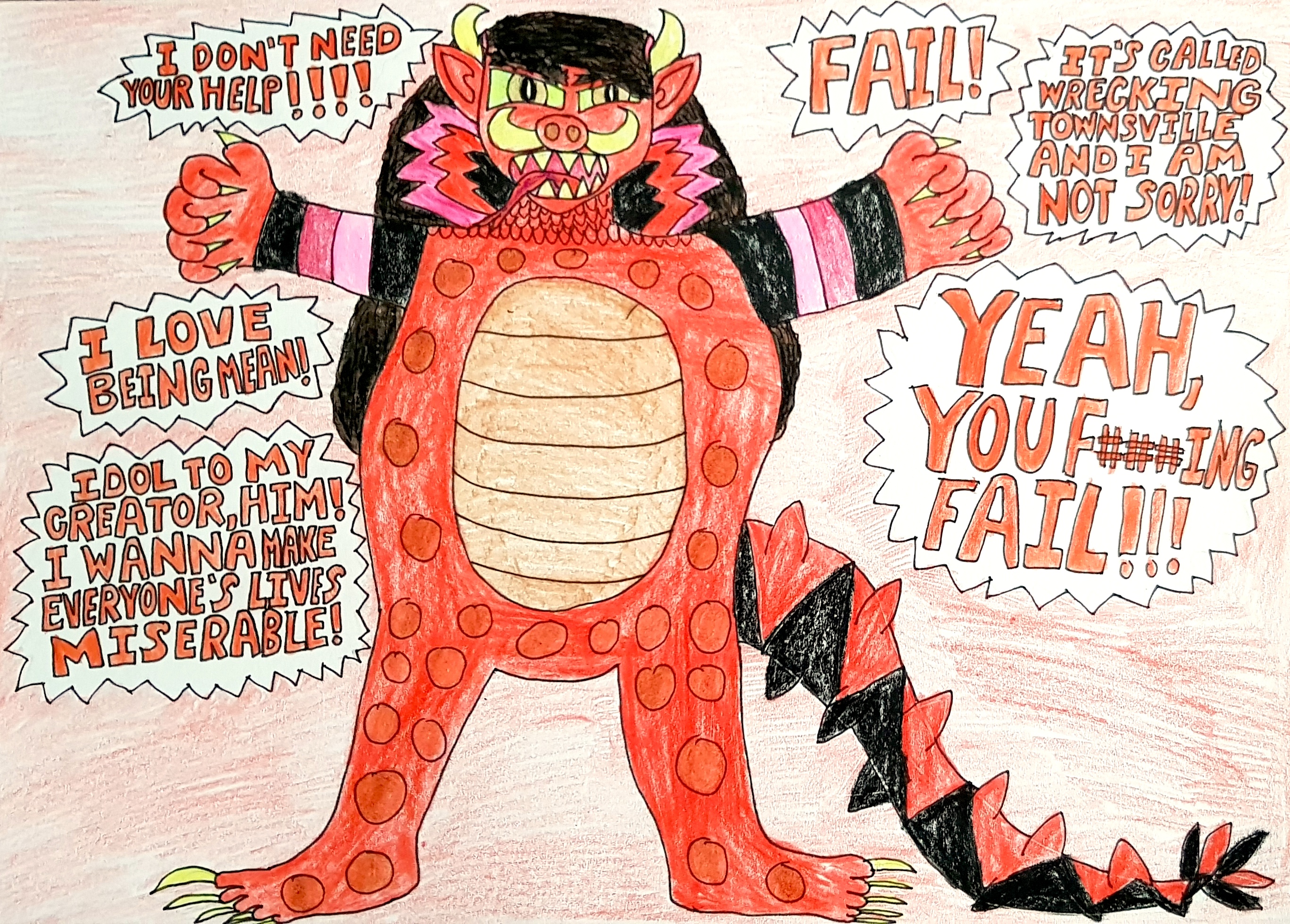