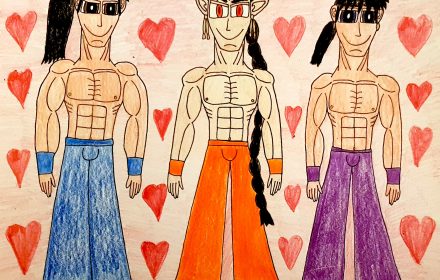 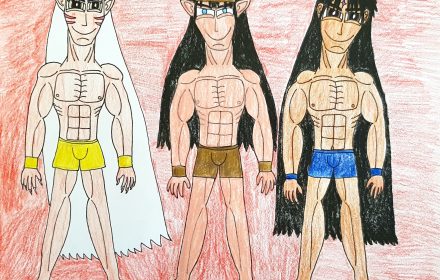 (Sesshoumaru, Kouga, and Bankotsu are punching and kicking demon corpses, which they have mounted as punching bags. Sesshoumaru turns and takes notice of the audience.) Sesshoumaru: Kouga, Bankotsu, we have guests. (Kouga and Bankotsu stop their punching and kicking and turn to the audience with smirks on their faces.) Sesshoumaru: We did not expect you to arrive at this hour. Kouga: If you didn’t know where you were, don’t worry. We’ll tell it to you. Bankotsu: You just entered forbidden territory. Where the strong triumph and the ones who can’t hack it get a taste of our fists smeared in blood. Sesshoumaru: In layman’s terms, you have just entered our palace of pain, suffering, and general unpleasantness. Kouga: So, no cowards, wimps, traitors or liars allowed! Bankotsu: Unless, of course, you want to be mercilessly mauled by all three of us. Sesshoumaru: Whether with my own claws and fists, which can rip you into pieces… (Sesshoumaru cracks his knuckles.) Kouga: Or have me break your neck in two… (Kouga rolls his head, his shoulders, and cracks his knuckles.) Bankotsu: Or have me beat you into a bloody pulp… (Bankotsu cracks his knuckles and rolls his shoulders.) Sesshoumaru: We could do a whole lot of damage to you. Kouga: And we are not going to hold back. Bankotsu: No matter how many times you tell us to stop. Sesshoumaru: However, if you want a less grueling approach, you could always head to my most esteemed wife… Kagura: I can assure you that I am just as ruthless as my husband, especially where my blade and fan are concerned. Kouga: Or my darling wife… Sango: Approach me with lust and I will gladly lop off your head and maybe quarter you. Bankotsu: Or my lovely wife. Kagome: Don’t think I’m exempt from giving you a death warrant. I could shoot off your head with my bow and arrow and slice you in half with my sword. Bankotsu: They all got a point. Or perhaps… Sesshoumaru, Kouga, and Bankotsu: Our eldest children. Rin, Shippou, Kai, Shinta, Hakudoushi, and Kanna: Oh, how we would love to take you down. Sesshoumaru: Either way, if you are willing to take us down, you would have to prove yourself to endure all of us. Kouga: So, we will see you right here. Bankotsu: If you dare, that is. This piece of Sesshoumaru, Kouga, and Bankotsu fan art is dedicated to GavinMichelli who celebrated his birthday a week ago. So, Gavin, I hope you had such a magnificent, grand, and awesome birthday and I wish you a lot of joy, love, happiness, and greatness in your life as an artist and as a person. This is also dedicated to those who ship Sesshoumaru, Kouga, and Bankotsu as an awesome, strong, and phenomenal BroT3 or epic friendship consisting of three ambiguously-sided badasses who enjoy kicking butt and taking names. Here we have 38-year-old Sesshoumaru, 37-year-old Kouga, and 36-year-old Bankotsu being the strong, handsome, tough, buff badasses that they are who will definitely make anyone crap his or her pants off when he or she encounters these gentlemen. Whether one marvels at their bodies or trembles at their presence, one should know when to either fight back or retreat when encountering these men of steel. As you can tell from their outfits, I made them be in Pankration garb to show that they are not only specialists of this deadly Ancient Greek martial art which is a precursor to Mixed Martial Arts, but to also show how lethal yet masculinely sexy they are as fighters and as individuals. Knowing how well they fight both individually and as a group, they would definitely be able to give their opponents no mercy whatsoever. Well, I hope you all enjoyed this piece of BroT3 awesomeness found in Sesshoumaru, Kouga, and Bankotsu, and I will see you all in the next submission. Take care and have a great summer. Sesshoumaru, Kouga, and Bankotsu from Inuyasha belong to Rumiko Takahashi and Sunrise. 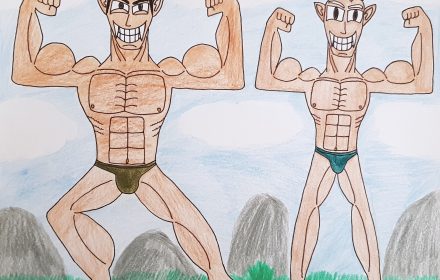 (Shuran is lifting two heavy boulders while releasing a series of powerful grunts and roars. Hakkaku enters lifting slightly lighter boulders.) Hakkaku: Hey there, Shuran. (Shuran puts down the boulders and so does Hakkaku.) Shuran: Hakkaku, my old friend. What brings you here? (Shuran flexes his tremendous biceps and emits a huge roar.) Shuran: Have you come to challenge my strength and even admire how much I have worked hard for these muscles?! Hakkaku: Yeah and yeah. Man, Shuran, you really have been working hard on those biceps. Shuran: Thanks, Hakkaku. You know very well that my most beloved wife Ayumi, my kids, and my grandkids love it when they see my muscles. Speaking of which, how about you show me yours and then we can have a posedown from here. Hakkaku: All right, Shuran. (Hakkaku flexes his biceps for Shuran, as he takes notice of them.) Shuran: You definitely have not been slacking off, bro. Hakkaku: Thanks. You know that your sister, Karan, finds them nice to touch. Plus, my kids and grandkids just love to look at them. Shuran: True, Hakkaku. But they’re still not as big as mine. (Shuran raises his arms, flexes his biceps, flexes his calf muscles, and emits a huge roar.) Shuran: These are what real muscles look like, my friend. So, do you accept this challenge? (Hakkaku flexes back at Shuran.) Hakkaku: I do. (Both Shuran and Hakkaku flex their biceps, triceps, make their pectoral muscles bounce, and do the most muscular pose facing towards each other.) Shuran (grunting): You surely don’t give up, huh Hakkaku. Hakkaku: Giving up is not part of my vocabulary, Shuran. (Shuran and Hakkaku chuckle at each other, as they stand erect.) Shuran: Well, old friend, it was a nice posedown we had. We should do this again. Hakkaku: You got it, friend. (Shuran and Hakkaku clasp hands.) Shuran: See you later, man. Hakkaku: Anytime, bud. This piece of Shuran and Hakkaku fan art is dedicated to NadoArts who celebrated his birthday five days ago. Entonces, Nado, espero que hayas tenido un cumpleaños magnifico, excelente y maravilloso y te deseo mucho amor, felicidad, prosperidad y abundancia en tu vida como artista y como persona. This is also dedicated to those who ship Shuran and Hakkaku as a strong, awesome platonic pairing or a BroTP. Here we have 36-year-old Shuran and 35-year-old Hakkaku being the strong, handsome, muscular best friends that they are and showing just how strong they truly are, what with Shuran and his massive size and Hakkaku with his well-toned body. I totally love the idea of a big, burly, buff, tough guy like Shuran being really good friends with someone as a well-built, fun-loving, goofy yet strong guy like Hakkaku. Their personalities bounce off of each other so well and Hakkaku could have someone like Shuran to be almost like a big, protective older brother while also enjoying each others’ company testing each others’ strength and always trying to physically one-up each other. Regardless, they have a very strong bond where Shuran is akin to a large-and-in-charge, rowdy, tough older brother and Hakkaku is the handsome, fun-loving, and gregarious younger brother. Well, I hope you all enjoyed this and I will see you all in the next submission. Take care, everybody. Shuran and Hakkaku from Inuyasha belong to Rumiko Takahashi and Sunrise. 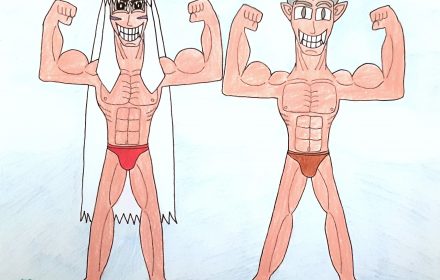 Inuyasha: Yo, Ginta. Ginta: Yeah, Inuyasha. Inuyasha: Show me your muscles, man. I just wanna see how well you managed to get your biceps in shape. Ginta: All right, Inuyasha. (Ginta flexes his biceps, as Inuyasha observes them and touches them.) Inuyasha: Not bad. Now, check out mine. (Inuyasha flexes his biceps. Ginta marvels at the size of Inuyasha’s biceps.) Ginta: Wow! Inuyasha. Those are quite the huge biceps you have. Inuyasha: Thanks, Ginta. You wanna have a posedown? Ginta: You bet. (Inuyasha and Ginta begin to flex their muscles for each other, all while grunting, snarling, and growling.) Inuyasha: Hehe. Shunran is surely lucky to have a strong guy like you, Ginta. Ginta: Hey. My muscles always charm her. And Ayame must be really impressed by your brute strength and great muscles. Inuyasha: I thank you for that compliment, Ginta. And, yeah, Ayame is really happy to have a guy like me, especially when my muscles can come in handy. Ginta: All right, Inuyasha. Are you ready for the finale? Inuyasha: I sure am, Ginta. (Inuyasha and Ginta raise their arms and flex their biceps. After that, they hunch, do the most muscular pose, stand erect, and body slam each other roaring really loudly.) Inuyasha: Well, Ginta, I enjoyed that. Ginta: So did I, Inuyasha. Let’s say we head back home to our darling wives, kids, and grandkids. Inuyasha: Sure thing. We can even come back for another posedown round and maybe bring my sons along with me. Ginta: Absolutely. Now, let’s head home. (Inuyasha then noogies Ginta, as they head towards their home.) This piece of Inuyasha and Ginta fan art is dedicated to Daniel aka EthanTK who celebrated his birthday more than a week ago. Entonces, Daniel, espero que hayas tenido un cumpleaños maravilloso y increíble y te deseo mucho amor, felicidad, prosperidad y abundancia en tu vida como artista y persona. This is also dedicated to the people who ship Inuyasha and Ginta as a strong, awesome, and magnificent platonic pairing or BroTP. Here we have 36-year-old Inuyasha and 35-year-old Ginta being the muscular best friends that they are and flexing their well-shaped biceps on a clear, sky-blue day. It says something when these two have excellent physiques anyone can marvel at. I hope you all enjoyed this and I will see you all in the next submission. Take care, everybody. Inuyasha and Ginta from Inuyasha belong to Rumiko Takahashi and Sunrise.