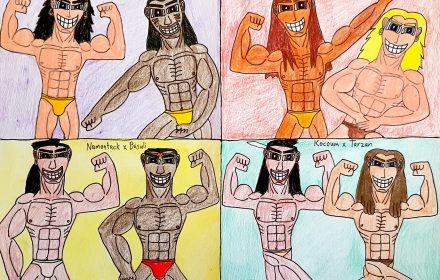 This piece of Conan x Zula, Arkon x Ka-Zar, Namontack x Basuli, and Kocoum x Tarzan fanart is dedicated to CaseyLJones, reiner55, Makoto-nii-chan, Kevin aka Luipunker91, Neal Rame aka Channeleven, Taylor aka RaccoonFoot, Alexis aka dark-kunoichi92, Rico de Zoysa aka RicoDZ, Jose-Ramiro, Kay aka CaptainEdwardTeague, Genevieve aka Porcelain-Requiem, and Echo Kammer aka Ech0Chamber who celebrated their birthdays several days and weeks ago. So, I hope you guys had awesome and delightful birthday celebrations and I wish you a lot of love, joy, happiness, prosperity, and abundance in your lives as artists and as people. Wie wir auf deutsch sagen, ich hoffe ihr Leute hattet tolle und herzliche Geburtstagsfeier und ich wünsche euch viel Liebe, Freude, Glück, Wohlstand und Reichtum in euren Leben als Künstler und als Menschen. Como se dice en español, espero que hayaís tenido celebraciones de cumpleaños muy maravillosas y bonitas y os deseo mucho amor, alegría, felicidad, prosperidad y abundancia en vuestras vidas como artistas y como personas. This is also dedicated to all of the ConZul, ArkKaz, NamonBas, and KocTar shippers out there. Sit back, relax, and soak in that sensation and spice found in these hot, sexy musclemen couples. So, ladies and gentlemen, animation fans of all ages, here we have my most favorite male slash couples of all time from four of my most favorite animated installments of all time starring my most favorite musclemen heroes of all time, Conan x Zula from “Conan the Adventurer”, Arkon x Ka-Zar from “X-Men”, Namontack x Basuli, and Kocoum x Tarzan both respectively from Disney’s “Pocahontas” and Disney’s “Tarzan” respectively. I basically picture these muscle hunks’ relationships like this. Conan x Zula (The Bodybuilder Warrior King Couple) Conan is the dominant partner in this relationship considering that he is commanding, tough, and will not take crap from anyone. Zula is the rational, measured, and nurturing submissive partner in this relationship who is just as strong and tough as Conan. In spite of their differences, they have a very loving relationship with each other. Conan loves Zula for how nurturing and steadfast he is, while Zula loves Conan for how determined, strong, and tough he is. Together, these pair of warrior kings make not only a formidable pair in the battlefield but also when they are together. Arkon x Ka-Zar (The Muscle Warlord Couple) Arkon’s determination, toughness, strong ideas, and warlike mentality make him quite the candidate for being the dominant one in this relationship. Ka-Zar’s wild nature, animalistic instincts, raw strength, and peerless combat prowess make him the apple of Arkon’s eyes. When these two are together, they complement each other really well in terms of normalizing each other. Whenever Arkon gets too big for his boots, Ka-Zar will not be afraid to keep him down to earth. Whenever Ka-Zar has any mood swings or has one of his wild episodes, Arkon would always be the one to soothe him. Even though they may be strong, handsome, tough warlords on the outside, doe not mean they can be cuddly with each other on the inside. Namontack x Basuli (The Buff Macho Warrior Couple) Namontack is truly the Alpha Male of this relationship, given his rough outer shell, focus, determination, and strict warrior code, thus being the dominant one. Basuli may uphold his strict warrior codes but he is also enthusiastic, charismatic, and headstrong and he does not mind being the submissive partner in this relationship. Namontack and Basuli admire each other for their strong fighting skills and their godly muscular physiques. Moreover, Namontack does find Basuli’s headstrong personality admirable and fun, while Basuli finds Namontack’s focus and toughness to be his best features aside from his strong build. They would definitely be the couple who would go into battle one moment and have sweet intimacy with each other while sensually touching each others’ muscles. Kocoum x Tarzan (The Sexy, Sinuous, Sinewy Nature Fighter Couple) Kocoum may appear stern, silent, and stoic but when he is around Tarzan, he lets go of his defenses and proves himself to be a dominant and protective husband. Tarzan may be deemed as a savage wild man complete with animal instincts, but he is so thankful to have a wonderful, strong, strapping husband like Kocoum in his life. With their strength, speed, and overall athletic prowess combined, they are certainly a force to be reckoned with, especially when it comes to scaring their enemies with their mere presence. However, when they are alone together, they are wonderfully intimate with Kocoum admiring Tarzan for how compassionate and funny he can be and Tarzan admiring Kocoum for his loyalty and genuineness. And those, my dear viewers, are my most beloved male slash muscle couples of all time in this piece of fan art. I hope you all enjoyed this and I will see you all on the flip side. Take care and have a lovely spring. Conan of Cimmeria and Zula of the Wasai from Conan the Adventurer (1992) belong to Robert E. Hayward and Christy Marx. Arkon and Ka-Zar from X-Men (1992) to Stan Lee and Jack Kirby. Namontack and Kocoum from Pocahontas belong to Disney. Basuli and Tarzan from Tarzan and The Legend of Tarzan belong to Edgar Rice Burroughs and Disney. 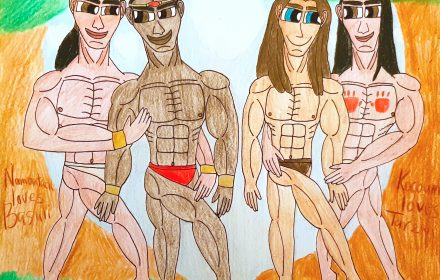 This piece of Namontack x Basuli or NamonBas and Kocoum x Tarzan or KocoTar fan art is dedicated to YANN-X and itanatsu-chan who celebrated their birthdays a few weeks ago and Jeff Snyder aka twilightsparkle3562 and Ikrines who celebrated their birthdays a few days ago. So, I hope you guys had such magnificent, awesome, and grand birthdays and I wish you a lot of love, prosperity, and abundance in your lives as artists and as people. Comme on dit en francais j’espère vous avez magnifiques, merveilleuses et grandes anniversaires et je vous souhaite beaucoup d’amour, de prosperité et d’abondance dans votres vies comme artistes et personnes. This is also dedicated to all of the NamonBas and KocoTar shippers out there. So, sit back, relax, and soak in that Namontack x Basuli sexiness and that Kocoum x Tarzan hotness.

Greetings, fellow OTP shippers of Namontack x Basuli and Kocoum x Tarzan! It is I, your old friend Antoni with another written entry involving a list of fan-children from my two favorite Disney Jungle Male Slash OTPs of all time. I have always loved these two pairs of hunky, muscular couples, so, I thought it would be great to compile a list of the NamonBas and KocoTar fan-children. As to be expected, I am not only going to list the children down but also the two sets of fathers. Moreover, I will place their ages as of 2019, their birthdays, their birth years from the modern era, and their statuses, as I will not go too in-depth with their biographies because the fan art submissions are reserved for that. With that said, let’s get cracking. The Tough Powhatan Warrior Muscle Hunk Dads Namontack Age: 50 Birthday: January 2, 1969 Status: Married to Basuli since 1999 Kocoum Age: 48 Birthday: March 1, 1971 Status: Married to Tarzan since 1999 The Handsome Waziri Fighter Muscle Hunk Dads Basuli Age: 47 Birthday: January 3, 1972 Status: Married to Namontack since 1999 Tarzan Age: 46 Birthday: February 1, 1973 Status: Married to Kocoum since 1999 The NamonBas (Namontack x Basuli) Offspring Imamu Age: 26 Birthday: March 23, 1993 Kwame Age: 26 Birthday: March 23, 1993 Kofi Age: 26 Birthday: March 23, 1993 Mugambi Age: 25 Birthday: February 3, 1994 Keewazi Jr. Age: 25 Birthday: February 3, 1994 Ashanti Age: 22 Birthday: July 2, 1997 Nomusa Age: 21 Birthday: August 3, 1998 Ekua Age: 20 Birthday: June 3, 1999 The KocoTar (Kocoum x Tarzan) Children Korak Age: 26 Birthday: April 2, 1993 Jabari Age: 26 Birthday: April 2, 1993 Imari Age: 26 Birthday: April 2, 1993 Mangani Age: 25 Birthday: April 6, 1994 Bongani Age: 25 Birthday: April 6, 1994 Mara Age: 22 Birthday: August 30, 1997 Kiara Age: 21 Birthday: August 30, 1998 Torah Age: 20 Birthday: August 3, 1999 Well, I hope you all enjoyed this list. If you are wondering how Namontack’s, Kocoum’s, Basuli’s and Tarzan’s now grown-up kids came to be, they were orphans until these four jungle warriors adopted them as their own children and, therefore, ended up two sets of big happy families with two dads. More specifics will come when I hopefully make fanart of these two sets of families. With that said, I will see you all in the next submission. Take care and have a great spring. Namontack and Kocoum from Pocahontas (1995) and Basuli and Tarzan from Tarzan (1999) belong to Disney.