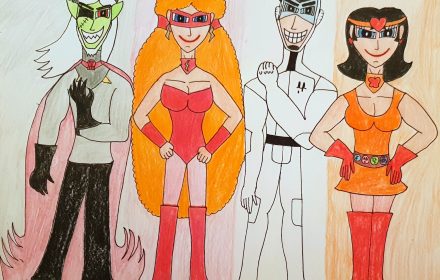 This piece of GreenBell and ProfKeane fan art is dedicated to wyattloughrie, anne-de-breuil, chateaugrief, dolly—spiral, and Regulas314 who celebrated their birthdays last week, Dragonprince18, lashesgem, and ScarletRed101 who celebrated their birthdays two days ago, and Aleksandra aka Skyrawathi and Miamelly who celebrated their birthdays yesterday. So, I hope you all had such fabulous, phenomenal, and grand birthday celebrations. I wish you a lot of love, prosperity, and joy in your lives as artists and as people. I would also love to dedicate this to all of the awesome GreenBell and ProfKeane shippers out there. Sit back, relax, and enjoy. Before Team Xtreme ended up being Townsville’s greatest saviors, before their allies, The Phenomenal Four, aided them in keeping Townsville safe from evil while doubling that with wiping Citysville from crime, there was The Quantum Quartet consisting of Mr. Lucius Green who went by The Creature, Miss Sara Bellum who went by Mega Bellum, Professor John Utonium who went by PowerProf, and Miss Sandra Keane who went by Wonder Keane. They were academics heavily involved in science, education, politics, philosophy, and social sciences by day and superheroes during their breaks. Yes, I know Professor Utonium’s PowerProf getup was created in order to spend more time with the Powerpuff Girls, thus fighting crime together, but where my headcanon is concerned, Mr. Green, Mrs. Bellum-Green, Professor Utonium, and Mrs. Keane-Utonium were, once upon a time in the 80’s, Townsville’s superheroes akin to the Fantastic Four before retiring the gig in the 90’s to live their normal lives in their chosen professions. Yes, this type of passing the torch is also akin to The Incredibles, what with Mr. Green and Mrs. Bellum-Green being the Rowdyruff Boys’ parents and Professor Utonium and Mrs. Keane-Utonium being the Powerpuff Girls’ parents, because it does show the dynamics that these two families have when it comes to occasionally helping their children and grandchildren save Townsville and the world. Moreover, in my headcanon involving The Quantum Quartet, Professor Utonium is the one who creates the costumes such as his PowerProf getup, Mr. Green’s Creature Cape, Mrs. Bellum-Green’s Mega Bellum mask, top, gauntlets, and jet boots, and Mrs. Keane-Utonium’s utility belt, headband, and jet boots and ensures that they are durable in every mission. He is essentially a combination of Iron Man’s Tony Stark and The Incredibles’ Edna Mode, thus making him the brains and the savvy technician of this quartet of older generation superheroes. Mr. Green aka The Creature is the gentle giant. He is compassionate, kind, and merciful towards his teammates and is a gentleman in every single way. However, if one were to be on his bad side, he would transform into a vicious demon complete with fangs and grotesque features and give that felon not only a well-deserved scare but also a willingness to run to the nearest policeman to turn himself in. Mr. Green or The Creature is quite akin to The Thing, in which he is a supernatural creature who bears a lot of humane qualities, in spite of his outwardly haunting appearance. Mrs. Bellum-Green aka Mega Bellum is the tactician who always ensures order and great teamwork within their group. She is an expert at hand-to-hand combat and she can effectively think fast on her feet. Her gauntlets are also used as shields to protect her from any attack. Mega Bellum is a combination of the Pink Sapphire and Wonder Woman considering that she is a magnificent combination of brains, brawn, and beauty. Mrs. Keane-Utonium aka Wonder Keane is the pacifist of this group who keeps the harmony going in The Quantum Quartet. Her utility belt is based on the subjects she teaches ranging from music to language and grammar to mathematics to values and principles. She would use these features in order to attack criminals and put them in their place, decode messages, decipher numerical codes, and receive emergency messages. Sure, her whole getup and skills are a combination of Wonder Woman and Batman, but Wonder Keane is akin to Mary Marvel in which she can combine strength, wisdom, and feminine charm to make her a complete package. There you have it, dear viewers. The Quantum Quartet in all of their dutiful glory and who still manage to look exceptional even in their 50’s. I hope you all enjoyed this and I will see you all in the flipside. Take care and have a great spring. Mr. Green, Ms. Bellum, Professor Utonium, and Miss Keane from The Powerpuff Girls belong to Craig McCracken and Cartoon Network. 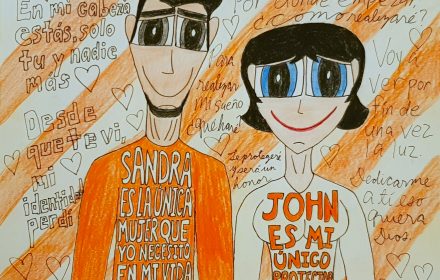 “Para realizar mí sueño ¿que haré? Por donde empezar, ¿como realizaré? Tu tan lejano amor, lo único que se es que ya no se quien soy, de donde vengo y voy. Desde que te vi, mi identidad perdí, en mi cabeza estás, solo tu y nadie mas y me duele al pensar que nunca mía serás, de mi enamorate! Mira que el día que de mi te enamores yo voy a ser feliz y con puro amor te protegeré y será un honor dedicarme a ti eso quiera Dios. El día que de mi te enamores tu, voy a ver por fin de una vez la luz y me desharé de esta soledad, de la esclavitud ese día que tu de mi amor te enamores tu, veré por fin de una vez la luz.” -De Mí Enamórate, Daniela Romo, Lyrics by Juan Gabriel, Recorded and Released in 1986 from the album Mujer de todos, mujer de nadie   English Translated courtesy of Applecid1 from Lyrics Translate: “To realize my dream, what will I do? Where do I start? How will I realize it? your distant love, the only thing I know is that I don’t know who I am anymore, where I come from or where I am going Since I saw you, my identity I lost, in my head, you are, only you, and nobody else, and it hurts me to think that mine you will never be fall in love with me Look that the day you fall in love with me, I will be happy, and with my pure love I will protect you, and it will be an honor to dedicate my life to you, may God approve of this The day you fall in love with me, I will finally see the light, and I will get rid of slavery to this solitude That day that you, my love, fall in love with me, I will finally see the light”   This piece of ProfKeane fanart, which is part of KatyGorl’s Claim a PPG Pairing Month, is dedicated to Maria Júlia aka MarJulSanSil and Cry-chan aka Crystalcupcakes237 who celebrated their birthdays a couple of days ago. So, Maria, Crystal, I hope you ladies had a magnificent, awesome, excellent and blessed birthday. I wish you a lot of love, joy, and beauty in your lives as artists and people. Como se dice en español, yo espero os chicas hayaís tenido un cumpleaños maravilloso, grande, excelente y bendido. Os deseo mucho amor, felicidad y belleza en tus vidas como artistas y personas.   Before I became a loyal RRB/PPG shipper what with my main OTPs being Brickercup, Blossutch, Butchubbles, Blossoomer, and Boomubbles, though I used to love Blossick and Butchercup, but now my feelings for these two ships have gone down the drain and will never see the light of day again, I was hardcore Professor Utonium x Miss Keane shipper and that was when I was between seven to eight years old. I still am to this very day to the point where I saw it fit for these two to be a very strong couple to the point where I decided to make Miss Keane, known as Mrs. Keane-Utonium, be the mother to Blossom, Buttercup, Bubbles, and Bunny in accordance to my Team Xtreme headcanon. Moreover, according to the PPG fandom, their first names are John and Sandra, which I decided to keep as well.   It literally says something when my feelings for Professor Utonium and Miss Keane as a couple has continued to grow strong to this very day as a twenty-six-year-old adult. What’s not to love about having a firm yet patient and kind scientist pair up with a sympathetic and marvelous teacher who ensures discipline in a fair manner? Besides, ProfKeane, in my opinion, is one of the sweetest and most plausible adult couples of The Powerpuff Girls universe. Yes, their darling daughters and sons-in-law show their lovey-dovey attitudes with their shirts, so why not these parents? By the way, for those of you who do not speak Spanish, Professor Utonium’s shirt is translated as “Sandra is the only woman I need in my life”, while Mrs. Keane-Utonium’s is translated as “John is my only protector”. If this is not true love between my most favorite adult couple of The Powerpuff Girls, I do not know what is.   Being a huge fan of Daniela Romo and a good amount of songs, I saw it fit to put in “De Mí Enamórate” as a fine song choice for this couple, considering that both Professor Utonium and Mrs. Keane-Utonium grew up in the eighties. And let me just say, that even though Professor Utonium is in his mid-fifties and Mrs. Keane-Utonium in her early fifties, they still look as fabulous as ever and they age gracefully. Going back to the song, I figure that the melody speaks volumes to me and it is absolutely gorgeous. Entonces, amigos queridos, os disfruta esta canción de la magnifica Señora Daniela Romo.   Daniela Romo – De Mí Enamórate   Well, I hope you all enjoyed this and as we say in Spanish, hasta la próxima, amigos queridos y fantasticos.   Professor Utonium and Miss Keane from The Powerpuff Girls belong to Craig McCracken and Cartoon Network.