This piece of Brickubbles and Boomercup fanart, which is part of BrickercupMasterX3’s Boomercup Month, is dedicated to A.J. Miller aka AJthePPGfan who is celebrating his birthday today. So, A.J. I wish you a lot of love, joy, happiness, beauty, strength, triumph, and abundance on your very special day as well as in your life as an artist and as a person. This is also dedicated to all of the hardcore and awesome Brickubbles and Boomercup shippers out there. So, I hope you all enjoy this.
I’m sure you all had crushes no matter where you are in your life and you might have had butterflies in your stomachs, thus giving you that sensation of feeling so enticed when you see the apple of your eye. Well, the Blues can pretty much attest to that, especially when they were teenagers.
Ah, Boomer and Bubbles aka The Blues. They wear their emotions on their sleeves. They are the nicest and most sympathetic people of Team Xtreme. They are also really creative. They seemed to be truly and indubitably made for each other. As much as I am a huge Boomubbles fan and OTP shipper, as I do believe that they are the best color-coded couple, I will admit this, I also like Brickubbles and Boomercup so much as cute, innocent pairings. However, as you can tell, I am also a major Brickercup, Butchubbles, and Blossoomer fan and OTP shipper. At least, I can say that, in my most humble opinion, Brickubbles and Boomercup are more desirable in my eyes that Blossick and Butchercup combined, though they do not approach the OTP levels of Brickercup, Butchubbles, Blossutch, Blossoomer, and Boomubbles combined.
Boomer is seventeen years old while Bubbles is fifteen years old and they are both in the eleventh grade all back in the year 2009.
Bubbles the cheerleader, the girls’ track star, the star artist, the aspiring actress, singer, and musician, and the most lovable girl in school is totally enamored with seventeen-year-old Brick the most popular young man in school, the MVP of the basketball team, and one of Townsville’s most well-rounded students. Sure, she has her favorite teddy-bear boyfriend Boomer by her side and she loves her darling strongman Butch, but Bubbles goes crazy over Brick’s signature swagger and his way of showing the ladies a good time, which should be no surprise, as Brick and Bubbles have been really good friends when they were Kindergarteners and when the Ruffs and the Puffs joined forces as one amazing superhero team. Plus, they have each others’ backs for great measure.
Boomer the MVP of the soccer team, his school band’s lead singer, the aspiring actor, the boys’ track star, the Renaissance man, and one of the most handsome young men in school is head over heels in love with sixteen-year-old Buttercup the MVP of the volleyball team, the toughest and strongest girl in school, and the all-around athlete. As much as he loves his darling Bubbles and is so enamored with Blossom’s brand of awesomeness, Boomer just can’t get his eyes off of how strong, tough, and determined Buttercup really is.
However, we all know, at the end of the day, these were just silly, adorable teen crushes they had back in the days. At least one can rest assured, that the cuteness factor for these pairings held up rather well.
Well, I hope you all enjoyed this piece of Brickubbles and Boomercup fanart. See you all in the next submission.
Brick, Bubbles, Boomer, and Buttercup from The Powerpuff Girls belong to Craig McCracken and Cartoon Network. 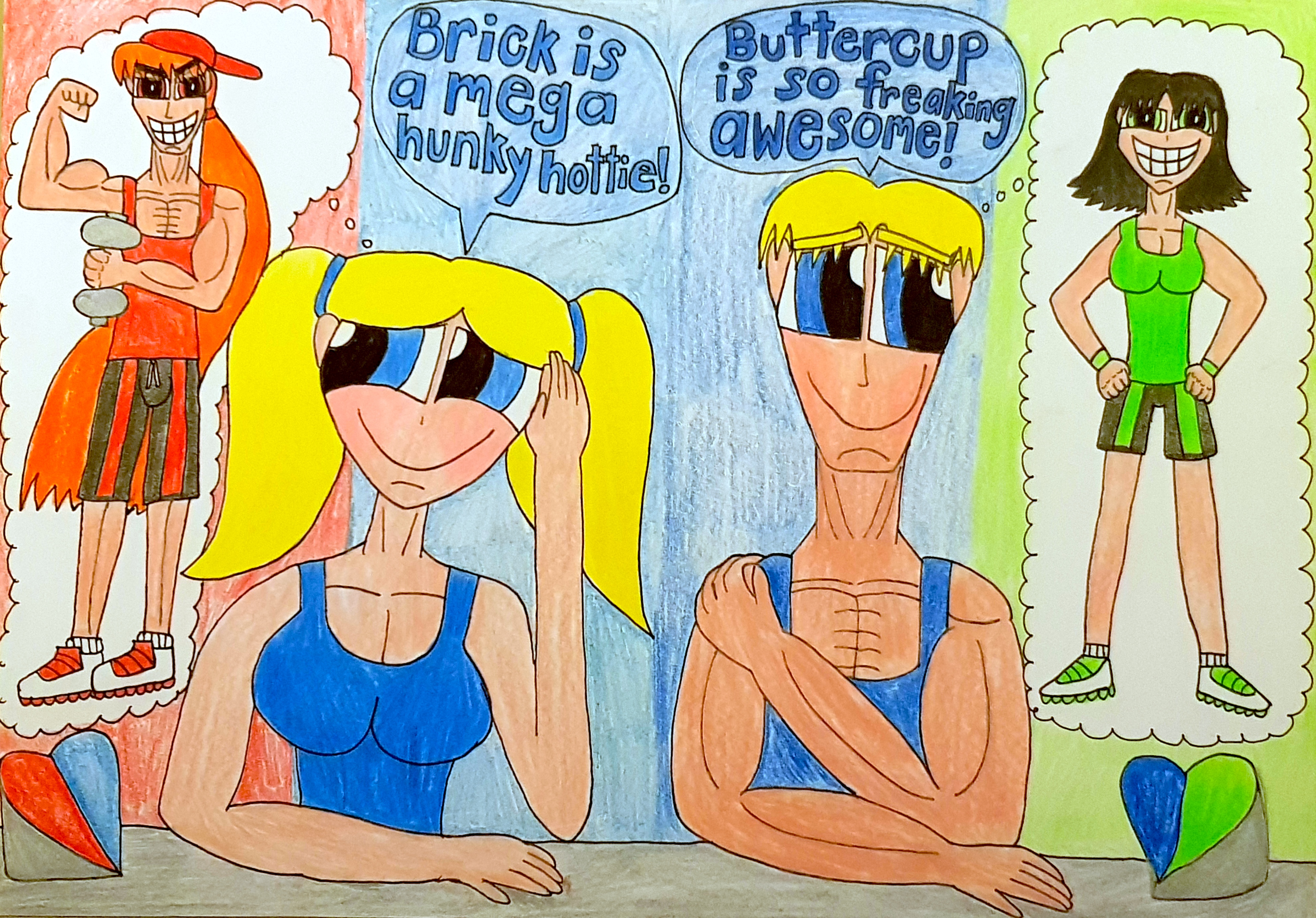