This InuAya Family Tree fan art is dedicated to Sage aka deerteeeth and Britta aka BlueShiranui who celebrated their birthdays two days ago, Varvara aka gricort who celebrated her birthday about two weeks ago, and Phanly Jewel aka Endyran who is celebrating her birthday yesterday. So, I hope you all had such magnificent birthday celebrations and I wish you all a lot of love, joy, happiness, beauty, strength, hope, triumph, prosperity, and abundance in your lives as artists and as people. Wie wir auf deutsch sagen, ich hoffe ihr habt wunderbare Geburtstagfeier und ich wünsche euch allen viel Liebe, Freude, Glück, Schönheit, Hoffnung, Triumph, Wohlstand und Reichtum in euren Leben als Künstler und als Menshen. This is also dedicated to all of the InuAya or Inuyasha x Ayame shippers out there. So, sit back, relax, and soak in that InuAya loveliness, awesomeness, and goodness.

I will say this once and I will say this again. No matter anyone says, I will never give up my most beloved Inuyasha OTP of all time Inuyasha x Ayame or InuAya, as my love and unquenchable passion for this couple knows no bounds whatsoever. Inuyasha and Ayame even have their progeny to prove how strong of a family they really are, what with Inuyasha being the muscular, handsome, strong, courageous, tough patriarch and Ayame being the brave, gorgeous, determined, awesome matriarch of this wonderful family. As much as I would have loved to put in their basic data for each InuAya family member, I decided to write it here in the description. Keep in mind that I am jotting their ages as of this year, if they ended up celebrating their respective birthdays, instead of going the over-accurate route of saying that he is 35 going on 36 and she is 32 going on 33. With that said, let’s get cracking, ladies and gentlemen.

Inuyasha the Strong, Sturdy Patriarch with Muscles of Steel and Ayame the Courageous, Determined, Brave Matriarch with Flawless Combat Prowess

Inuyasha and Ayame have been blissfully married for eighteen years and their relationship as husband and wife continues to flourish ever so beautifully. Moreover, Inuyasha’s muscles, toughness, and super strength are an amazing complement with Ayame’s agility, speed, and grace, thus making them a rather sexy couple all the way through. Not only do they continue to look as amazing as they are together, but they also stay be each others’ side through thick and thin showing abundant amounts of unconditional love, passion, and loyalty. Their combat prowess has even been passed down to their children and everything they do as parents to them is nothing short of a blessing. As parents, Inuyasha always loves to make sure that their children stay active, strong, and physically fit as possible and as a father, he has his own brand of disciplining, especially when he uses his skills as a fighter and his muscles to set his children straight. Ayame makes sure that their children stay as humble, gracious, and upright as they are in triumph and in loss and as a mother, she can be strict, especially when one of her children does something wrong, and nonetheless, she gives really great advice to make them grow not only as warriors but also as individuals.

Masataka and Masaya bear their father’s super strength, usage of muscles, and overall fighting spirit, thus making them the first set of muscle twins. With that said power comes a great responsibility they must uphold as the eldest brothers, as their younger siblings look up to them so much. Masataka may be cool, calm, and collected and Masaya may be gentle, responsible, and altruistic, but if one were to be so brazen as to upset them, they will unleash absolute Hell on the perpetrator with their super strength, iron claws, and unrelenting fighting spirit with them turning into full yokai. Masataka and Masaya have an extremely close bond as twin brothers and they always know how to solve their problems in a rather civil manner. At times, they even love to compete with each other, as they love to lift weights, wrestle, and practice various martial arts. When all is said and done, Masataka’s and Masaya’s loyalty to each other, their siblings, and their parents cannot be questioned.

Kenta and Keita are the second muscle twins of Inuyasha’s and Ayame’s fine family. As opposed to Masataka and Masaya who are calmer in demeanor, Kenta is the rowdier one who exudes some macho pride while Keita is rowdy but a little bit more level-headed. Kenta and Keita have an amazingly close brotherly bond with Masataka and Masaya to the point where all four of them are best friends who stick with each other through thick and thin. This even gets to the point where Inuyasha proudly states that Masataka, Masaya, Kenta, and Keita are his most favorite sons, especially considering all of the posedowns, wrestling matches complete with full nelsons, sleeper holds, bearhugs, and Boston crabs, weightlifting to ensure that their muscles are in great shape, roaring matches, martial arts matches, boxing matches, and general competitiveness father and sons constantly engage in. Kenta and Keita not only love to compete with each other, but they also love to compete with Masataka and Masaya in a lot of physical activities. Moreover, Masataka’s, Masaya’s, Kenta’s, and Keita’s strong fraternal bond can give the likes of Castor and Pollux a run for their money because they work with each other so effectively, thus combing muscles, combat prowess, and a certain wild animal grace to the greatest of their abilities.

It is clear that Masataka, Masaya, Kenta, and Keita are essentially Inuyasha’s most beloved favorite sons, as they look up to him as their hero, their role model, and their inspiration for becoming stronger. On top of that, Ayame even unconditionally loves her dear sets of eldest twin sons that she is willing to make sure that they are safe. Now that these two sets of twins had the spotlight let us go to the next three children.

Kaito may also have the muscles and strength just like his older brothers and his father, but he is also very tactful. Moreover, he is a gracious, generous, gentle soul who cares a great deal about nature and loves to take silent walks in the woods, aside from the usual sprinting, swimming, weightlifting, boxing, wrestling, and martial arts. As much as he adores his father, Kaito is a lot closer to his mother and always sees her as his greatest role model because of her independence, determination, and endurance. Kaito aspires to be as strong as his father and Inuyasha acknowledges how strong and fast of a fighter Kaito is. In terms of his siblings, Kaito looks up to Masataka and Masaya so much so that he sees them as his confidants, best friends, and the greatest people he has ever had in his life. He enjoys his playful wrestling and noogie matches with them and he even loves to race them home after hunting or spending time in the forest. He is even very close to his younger sisters, Momoko and Maya, as he is very protective of them and they like it when he shows his sensitive side.

Momoko’s brand of toughness, independence, and free-spiritedness makes her extremely admirable in her parents’ eyes and she is close to both of them. She is the type of girl who never backs down from a fight and always loves to get physical when the situation calls for it. Momoko enjoys sprinting, swimming, martial arts, hunting, and gathering, thus making her a child of nature. It was said that she can run so fast that she can outrun any cheetah. Sure, there are times that she does have a hard, rough external shell, but she is a sweet, emphatic, loving young lady on the inside. As much as she loves her oldest brothers, Masataka and Masaya, she loves to have sparring matches with Kenta and Keita, especially the former, and she loves to spend quality time with Kaito, as their bond never falters under any circumstance. She and Maya find Masataka’s, Masaya’s, Kenta’s, and Keita’s muscle-flexing routine amusing and charming, even though Kenta’s and Keita’s machismo tend to annoy her. In terms of Kaito, Momoko finds it rather adorable when he works out whether he does chin-ups, sit-ups, push-ups or the usual weightlifting and punching the punching bag.

Being the youngest child of Inuyasha and Ayame, Maya brings so much optimism, joviality, motivation, unconditional love, and energy to everything they do together and individually. Maya is extremely close to her mother, as she aspires to be as fast, agile, and strong as her. She even admires Inuyasha because of how tough and loving of a father he can be to her. She even has a magnificent relationship with her older siblings, as she loves Masataka’s and Masaya’s brand of protection, Kenta’s and Keita’s brand of playfulness, Kaito’s empathy and kindness, and Momoko’s charm, femininity, and overall friendship. Maya, much like Momoko, loves to have sparring matches with Kenta and Keita to the point where she enjoys putting them in a dogpile. Aside from loving her family’s company, Maya also loves to enjoy the simple pleasures of the forest whether she picks flowers and berries, runs with deer or plays with small creatures such as rabbits and squirrels, she can never get enough of being in a place so meditative and peaceful as the forest.

I hope you all enjoyed taking a gander at this particular InuAya family tree and I will see you all in the next submission. Take care.

Inuyasha and Ayame from Inuyasha belong to Rumiko Takahashi and Sunrise 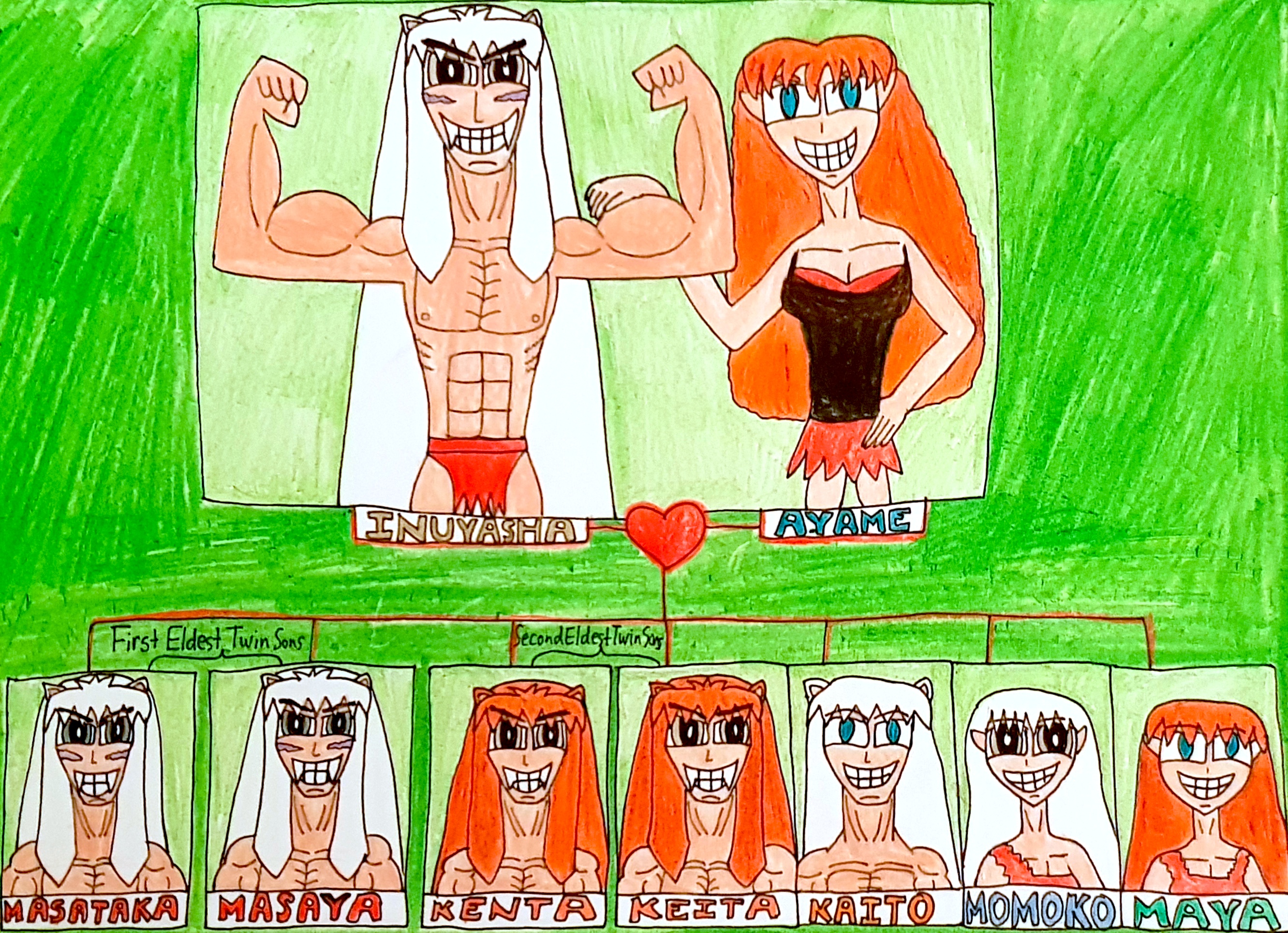