27-year-old Boomer, 24 going on 25-year-old Bubbles, and their lovely children strike again to be the wonderfully sweet and happy family that they are. We have already gotten to know the eldest twin sons, Bailey and Barley, the second eldest daughter, Brittany, and their younger daughter, Birdie, so, let us get acquainted with the other four children, Bonnie, Ben, Bali, and Belina.

Brittany’s sororal 5 going on 6-year-old twin sister, Bonnie Athena Green, was born on December 4, 2013 and it was said that she was also a jolly baby when she emerged to the point where unlike Brittany who was almost like a mini-Bubbles, Bonnie was a combination of Bubbles’ euphoria and Boomer’s sympathetic yet rambunctious nature. She is distinguishable through her slightly spiky hair and her flower-like scrunchies that she uses to keep her pigtails in place. Not only does she inherit her mother’s supersonic scream, which rendered the midwife deaf, but she also inherited her and her father’s ability to create anything out of raw energy such as that one time she made electric marbles emerge from her fingers and was flicking them across her room. She is even able to use her electric marbles in order to incapacitate any opponent rendering him shocked to his foundation. This got to the point where not only a special pacifier was made to control her supersonic screams but also special gloves to control her item forming powers, thus using them in times of need. In terms of linguistic skills, Bonnie is very fluent in Spanish, French, German, Italian, Japanese, Chinese, Korean, Farsi, Hindi, Russian, and Czech, as her parents as well as her aunt, Blossom, have a huge stack of language books and CDs in the Team Xtreme library. When all is said and done, Bonnie is a fun-loving, rambunctious, sweet, and euphoric young lady whose tomboyishness contrasts rather nicely to Brittany’s girlishness, as they get along superbly as sororal twin sisters.

Birdie’s 3 going on 4-year-old twin brother, Benedict David “Ben” Green, was also born on June 2, 2015. Unlike Birdie, who has heterochromia, Ben’s eyes are baby blue just like his mother. It was said that he was a jolly, euphoric baby when he and Birdie emerged from their mother’s womb and he takes after Bubbles in terms of being an animal and nature lover, sympathetic and caring to others, and being a sensitive boy. Aside from speaking the language of humans, Ben is also keen on speaking the languages of big cats, rodents, dogs, birds, reptiles, and primates. Much like Bubbles, he can also manipulate water, has a special sound wave which he emits by forming a long O-shaped mouth in order to immobilize his opponents, and has a shockwave he uses in order to incapacitate said enemies. Because he is sensitive, he does tend to let his “hardcore” side emerge whenever anyone provokes him or his family, thus making him react aggressively to anyone who mocks him, as he is an example of beware the nice ones.

1 going on 2-year-old Ballina Jacqueline “Bali” Green was born on July 3, 2017, and is the split image of Bubbles in terms of her personality. She is also a calm, placid little girl when she needs to be but she can also get easily furious when someone hurts her, her family or whenever there is crime afoot. Bali can emit lightning and thunder shockwaves from her hands and can summon up a rainstorm in order to incapacitate any monster or robber who dares cross her path. She can even emit supersonic screams to render her enemies completely deaf. In her free time, Bali loves to draw and paint, thus making her an artist in the making.

6-month-old Belina May Green was born on September 22, 2018. It was said that she was born a blissful, sweet baby who can create tiny stars with a wave of her small hands. Belina can even make those stars spread out across her crib to a dazzling effect. However, one must be careful not to cross her, as she can use these stars made out of raw energy as shurikens, thus leaving some nasty cuts on her enemies. Belina takes after her mother’s sweet, innocent personality and her father’s sympathetic personality, thus making her the most lovable of Boomer’s and Bubbles’ children.

Unsurprisingly, Boomer’s and Bubbles’ children get along exceptionally well. Rarely do they have a fight and when they do, it is usually resolved with a nice talking to. It is not just the parents protecting their children, but their children protect and help out their parents whenever they are in a sticky situation or when they are hurt.

Well, I hope you all enjoyed this Boomubbles family picture and I will see you all on the flipside. Take care and have a lovely day.

Boomer and Bubbles from The Powerpuff Girls belong to Craig McCracken and Cartoon Network.

Bailey, Barley, Brittany, and Birdie belong to me. 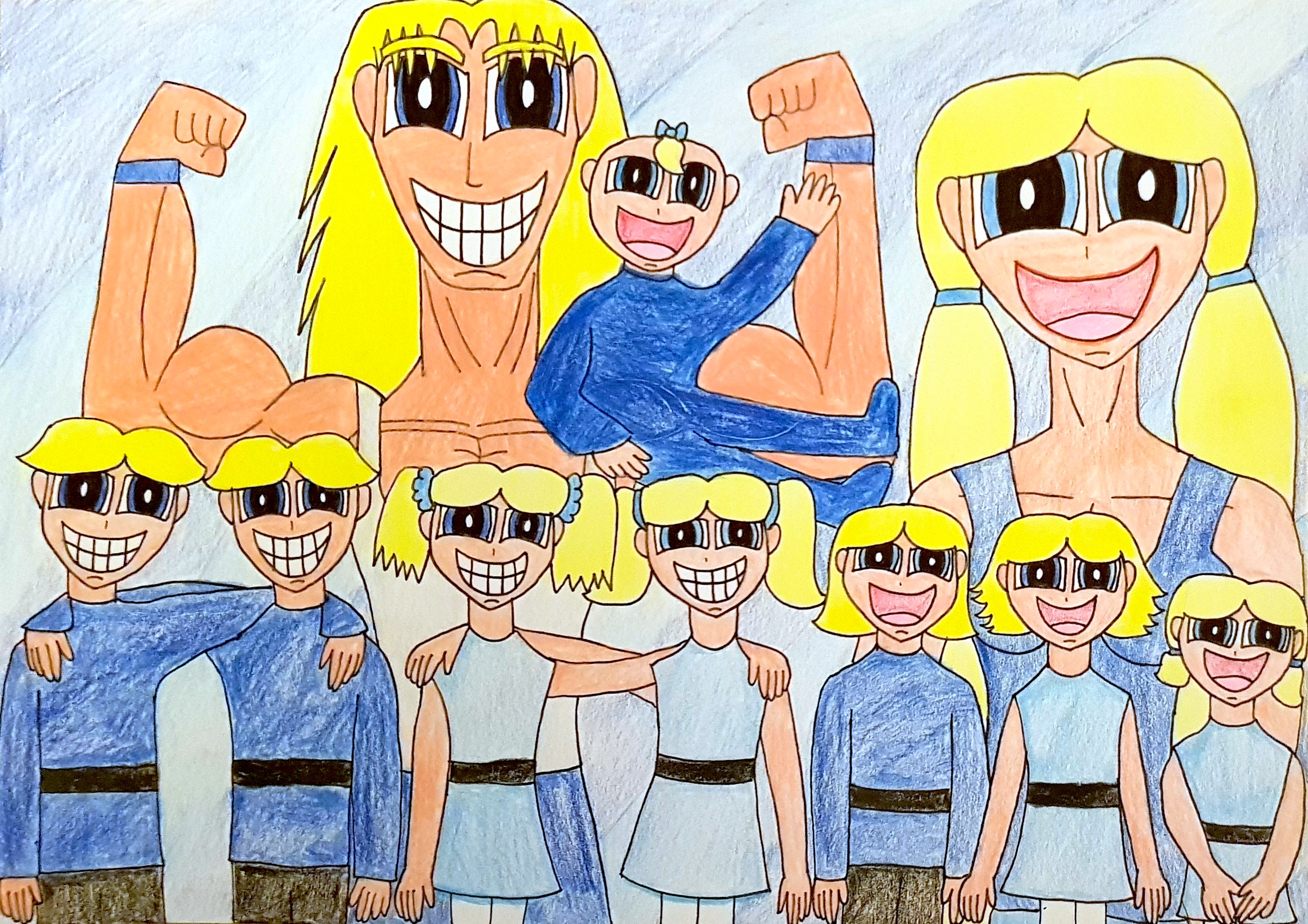