This piece of Boomer x Bubbles aka Boomubbles fanart is dedicated to Furipa93, PeddlerEnterprises, Barguest, MarsMellon, Izzy aka mystery79, Wakamoley, Justin Trinchero aka JQroxks21, Hinako29, and Katya aka TerinCat who celebrated their birthdays three weeks ago, Aliyah aka 529276, HimeVargas, Christie aka OceanFairie, Sara aka LyokoXanaPrincess, Blaze aka Blazeato, Sophie aka mikitwiki, MelodyDrawz, StrawberryMangoe, Fanny Heathcliff aka fanny000, merrittwilson, TheDayIsSaved, TheKikkaKibaz, DrawntoOceans, and Natalia S. Zepeda aka 4naruto-girl who celebrated their birthdays two weeks ago, Matthew aka ThyWordIsTruth, Archernis, murumokirby360, Pauly-chan, SweetLilHaru, and Weronika aka SamanthFox who celebrated their birthdays about a week ago. So, I hope you guys had amazing birthdays and I wish you a lot of love, joy, and happiness in your lives as artists and as people. Como se dice en español, espero que hayaís tenido un cumpleaños maravilloso y os deseo mucho amor, alegría y felicidad en vuestras vidas como artistas y personas. Come se dice in italiano, spero che voi avuto un anniversario molto strabiliante e vi auguro molto amore, gioia e felicita nelle vostre vite come artisti e persone. This is also a belated Mother’s Day gift to all of the moms out there especially that of my own and I hope you all had equally amazing Mothers’ Days. Finally, I would love to dedicate this to all of the wonderful Boomubbles shippers out there. So, sit back, relax, and soak in that Boomubbles sweetness.

We have come to witness how the greatest color-coded pairing to ever exist came to be from childhood sweethearts to officially boyfriend and girlfriend as teenagers to happily married as young adults to them having a wonderfully happy family. Let us strap in to check out the Boomubbles timeline.

Six-year-old Boomer and four-year-old Bubbles started to develop a sense of puppy love for each other. He found her nice, sweet, loving, kind, and sympathetic while she found him cute, strong, generous, hilarious, and really nice. This got to the point where the two of them would do a lot of activities together whether at school or in various play dates.

One instance of their blossoming love was when they wrote cards to each other. As they gave each other their heart-shaped cards, a lot of really nice things were said on there. Boomer always liked Bubbles’ drawings, how nice she was, and how sweet she was. Bubbles stated that Boomer was really cute, strong, and super nice. After that, they exchanged hugs.

In spite of how young they were, this was the first step to Boomer and Bubbles becoming the star-crossed lovers that they were. What better to start off than being childhood sweethearts.

It was in summer vacation before starting the fifth grade, when eleven-year-old Boomer and nine-year-old Bubbles were taking a walk in the forest, where they fully affirmed their relationship to each other. At this rate, this was more than just mere puppy love.

Boomer and Bubbles came across an oak tree and given the fact that these two were no strangers to romantic films, they thought it would be a nice idea to inscribe their names on that very tree. With the energy flowing from their fingertips, they inscribed their names to show how much they loved each other.

This was an affirmation of their relationship and they were proud and happy that this happened.

Starting the seventh grade was a joy for both thirteen-year-old Boomer and eleven-year-old Bubbles considering the fun activities they got to do together in the arts and music department. Boomer and Bubbles got themselves involved in the glee club, the folk music appreciation club, the jazz club, and the fine arts club.

This even got to the point where they asked the principal to perform for the opening assembly, which he consented. Boomer was on the guitar, Bubbles was on the bongos, and they opened with an original song welcoming the new school year, which had the students and teachers dancing on their chairs. Their performance was so great that the teachers thought they would make nice additions to the glee and music appreciation clubs. Their colleagues never regretted their presence ever since.

Privately, Boomer and Bubbles would even write cute yet admittedly syrupy love songs to sing to each other and even branch out to doing poetry with music. Henceforth, they found out that they can extend their love for each other through music and poetry.

Throughout their teen years, Boomer and Bubbles proudly proclaimed themselves to be boyfriend and girlfriend. Eleventh grade was no exception, as seventeen-year-old Boomer and fifteen-year-old Bubbles were at the height of their relationship.

Even though Boomer and Bubbles were primarily involved in the fields of visual and performing arts, Boomer was heavily involved in the wrestling team while Bubbles was a proud member of the cheerleading squad, where she would come up with innovative moves to the cheerleading routine so long as they are effective and safe. At times, her female friends would tease her because of how she would use these moves in order to show her full support towards Boomer. Nevertheless, they all supported her relationship.

Bubbles’ constant cheering and rooting for Boomer were what gave him the strength to win any wrestling competition. One should give Boomer credit that he was not a bad winner and he always won with a huge smile on his face making his positivity infectious towards his competitors and his teammates. Speaking of which, his competitors even remarked how lovely Boomer and Bubbles were together to the point where they tell them that they would love to attend their wedding one day.

In September 2011, nineteen-year-old Boomer and seventeen-year-old Bubbles got themselves enrolled at the Townsville University, where Boomer specialized in Film Studies, Creative Industries Management, and Musicology and Bubbles specialized in Theater, Fine Art, and Musicology. It also helped that their courses were rather similar, especially on that one fateful day where Boomer got down on one knee and asked Bubbles for her hand in marriage. Bubbles euphorically responded by giving Boomer a flood of kisses and hugs.

Bubbles even found out that she was to be pregnant with twin boys and the thought of having a family filled her and Boomer with such delight that they were married on March 6, 2012.

The joy did not stop there, as Bubbles gave birth to Bailey Philipp Green and Barley Raphael Green on August 4, 2012.

Boomer and Bubbles continue to be the loving, joyous, and euphoric couple that they are, with Boomer being the strong, athletic, lovable, protective, supportive husband and father and Bubbles being the nurturing, generous, compassionate, loving, kind wife and mother.

There you have it, ladies and gentlemen. The timeline history of Boomubbles. A relationship that began with the two of them being childhood sweethearts and blossomed into a loving, strong relationship that will never be broken. I hope you all enjoyed this and I will see you in the next submission. Take care, everybody.

Boomer and Bubbles from The Powerpuff Girls belong to Craig McCracken and Cartoon Network.

Bailey, Barley, Brittany, and Birdie belong to me. 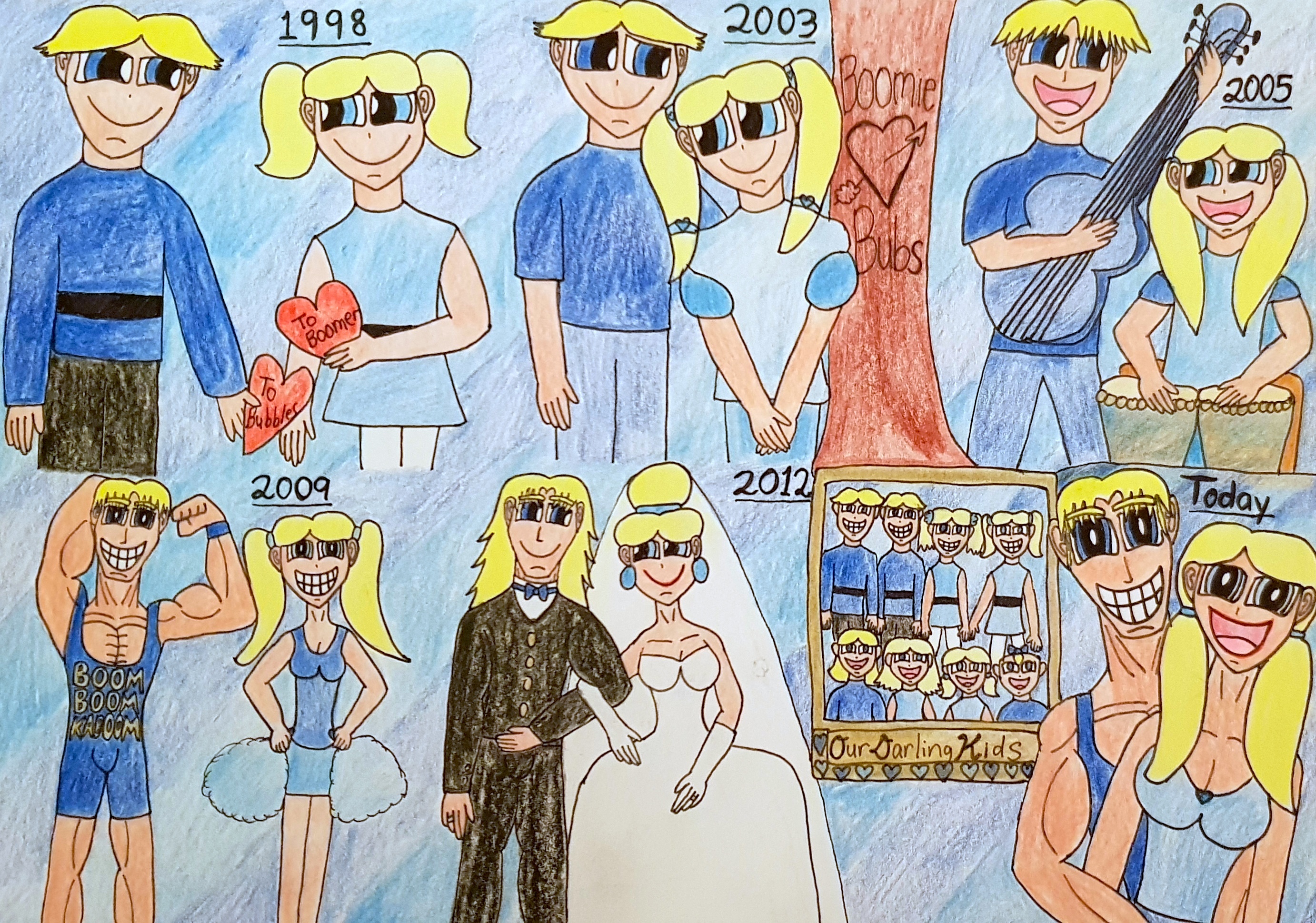