Ladies and gentlemen, boys and girls, Blossoomer shippers of all ages, I know I am going to hate sounding like a broken record but this aforementioned ship has officially dethroned Brickercup as not only the greatest color-clash couple of all time but also the best overall RRB x PPG pairing ever! The mere epiphany that I experienced with this couple just hit me. I initially found them cute together but, eventually, I ended up finding more reasons to support this particular couple and finally call myself a hardcore Blossoomer OTP shipper, thus sealing the deal with the color-clash aka mixed color RuffPuff couples as my most beloved OTPs of all time with Blossutch and Boomubbles following suit. For the record, Butchubbles will be the next couple history timeline yet the last one involving the RRB x PPG OTPs. With that said, let us witness how Boomer and Blossom grew from childhood sweethearts to dating in their adolescence to being married in their young adult years to being the happy family they are today.

It was the start of a new school year in Pokey Oaks Kindergarten for six-year-old Boomer and five-year-old Blossom. Ever since they first met each other, Boomer had a huge crush on Blossom because of how pretty, intelligent, and fierce she was to the point where he considered her to be the girl of his dreams. Though shy at first, he decided to write a letter to Blossom to kick off the new school year.

As the Ruffs’ and Puffs’ respective parents, Mr. Green, Miss Bellum, Professor Utonium, and Miss Keane, dropped them off to Pokey Oaks Kindergarten, Boomer made his move, swallowed his pride, and shyly gave his letter to Blossom. Blossom did not expect this move to come from Boomer but she was thankful for the gesture. The letter itself read,

I really like you because you are the prettiest, kindest, and smartest girl I ever met. You are an amazing person and I would love to be there for you every step of the way. I will stay by you, fight for you, and be strong for you. Keep on being the awesome girl that you are.

As she finished reading, Boomer gave her a smile and Blossom gave him a hug which he did not expect, as it left him blushing. She responded by saying that Boomer is a strong, kind, loving, and loyal person and she was very grateful for the letter he wrote to her. Ergo, this moment marked the first seeds being planted for Boomer’s and Blossom’s blooming relationship.

It was two weeks before the final fourth grade math exam involving multiplication of three to six-digit numbers and a month before summer break. Nine going on ten-year-old Blossom found herself being the tutor to eleven-year-old Boomer who was initially not that great in mathematics.

Remembering everything that Blossom demonstrated to him, he put what he had learned into practice when he had to answer one of the tasks he had trouble on, finding out what was 250 times 242. He immediately found out through doing it step by step that the answer was 60,500. As he showed it to Blossom, she was really proud of him and she knew he was ready to take on the exam.

As for the exam itself, Boomer ended up getting a B+ and Straight-A student Blossom was really proud of his achievement.

The summer break before thirteen-year-old Boomer and twelve-year-old Blossom entered the seventh grade, they were in a very special three-week French Music Appreciation summer course where they were able to live out one of their biggest passions and that was singing French chansons. Boomer and Blossom being the Francophiles that they were wanted to not only improve their French but also sing in the language more often because of the many great composers and singers they were inspired by, seeing they were fans of Catherine Deneuve, Charles Aznavour, and Édith Piaf and enjoyed watching French films and listening to French songs.

In this summer course, Boomer, Blossom, and many other participants learned about the great French chansonniers such as Jacques Brel, Georges Brassens, Édith Piaf, and Mireille Mathieu as well as the great French composers like Gabriel Fauré, Gustave Charpentier, Claude Debussy, Jules Massenet, and Georges Bizet. They even learned the French language as well as its grammatical structure, the semantics, the didactics, and the syntax. Boomer and Blossom loved the language so much to the point where they wanted to travel to Paris, Lyon, Bordeaux, Toulouse, Lille, Montpellier, and Marseille before they go to college.

Their summer course wrapped up with Boomer and Blossom performing their favorite French songs such as “La Vie en Rose”, “Ne Me Quitte Pas”, “Non! Je ne regrette rien”, “Milord”, and “Padam Padam” on stage. Because they sang so wonderfully together, they ended up having an encore number that was complete with audience participation “Vous etes seuls”.

By the time they started seventh grade, they even continued to participate in music and French clubs all while combining their academics. In terms of their song repertoire, they did not just limit themselves to French but they also sang in Italian, Spanish, German, Japanese, Cantonese, and Mandarin.

Boomer’s and Blossom’s relationship as boyfriend and girlfriend reached its full bloom and peak in the eleventh grade when Boomer was seventeen and Blossom was sixteen.

Seeing that Boomer was heavily involved as one of the finest members of the wrestling team, Blossom saw it fit to use her writing and photography skills to make great publicity for Boomer, especially for the Townsville High magazine. Competitors from rival schools as well as his teammates always stated that Boomer and Blossom were absolutely amazing as a couple akin to the lovers in many great romantic epics. They even saw how staunchly Boomer and Blossom supported each other and they managed to root for them until the end.

All of it came to a head in both Junior and Senior Prom, when Boomer and Blossom were crowned Prom King and Prom Queen. Finally, in High School Graduation, Boomer graduated with honors while Blossom was one of the two Valedictorians in Townsville High while garnering awards for being the best athletes in track, volleyball, swimming, soccer, Tae Kwon Do, and Karate and awards, being the best performing artists, and the best students in French, Spanish, German, English, English Literature, Japanese, and Chinese. Meanwhile, Boomer was also the best athlete in wrestling, basketball, baseball, and football and won the Best Character Award and Blossom was also the best athlete in gymnastics, battojutsu, and Kendo, won Journalist of the Year, won the George Washington Award for best in character and leadership, and won the Best Student Award in mathematics, physics, biology, chemistry, political science, IT, and history.

2011 was not only the year that Boomer, Brick, Butch, Blossom, Buttercup, and Bubbles graduated High School but also the year that Boomer and Blossom, Brick and Buttercup, and Butch and Bubbles ended up becoming really intimate with each other to the point where the young men ended up impregnating the young women. Blossom was initially worried because of aspirations she had, especially where her future in Townsville University was involved. Nevertheless, she and Boomer did everything they can to wrap up their graduation requirements and fly through the exams just in time for them to be married on May 19, 2011.

One thing was for certain. Boomer and Blossom would end up having their honeymoon in Lyon in a villa seeing that this was one of the many places in France Boomer and Blossom wanted to go to ever since they were young. They even went to Paris and Montpellier, which made them all the more happy to have experienced these places. However, during their French honeymoon, Blossom started to have doubts about becoming a mother. Nevertheless, Boomer assured her that she will be a great mother and he will always be there to help her with anything, as promised when they were kids that they were going to stick together.

By the time they got back to Townsville from France, Boomer and Blossom were more than happy to embrace the challenges of being parents. Finally, on July 25, 2011, Blossom gave birth to Bloom Amanda Green, Brittney Jane Green, Beauregard Alain Green, Brian Matthew Green, Becca Danielle Green, and Bella Donna Green. Within the first three months before college, they managed to nurture and take care of their first six children. Balancing college life and the life of being parents may have been tough for Boomer and Blossom but they managed to get through their respective courses with Boomer graduating with a Bachelor’s Degree in Film Studies, Creative Industries Management, and Musicology and Blossom got her Bachelor’s Degree in Chemistry, Political Science, and Journalism.

There you have it, ladies and gentlemen. Blossoomer. The first Ruff x Puff couple to become legitimate in my headcanon and one that is extremely healthy thanks to how much support these two have given each other throughout the years. They started out as childhood friends, gained similarities in interests, ended up as boyfriend and girlfriend, got married, had children, and are the amazingly loving couple they are today. I hope you all of you Blossoomer shippers and fans enjoyed this journey from the past all the way up to the present with this exceptional couple. Take care, everybody.

Boomer and Blossom from The Powerpuff Girls belong to Craig McCracken and Cartoon Network.

Basil and Bramley belong to me. 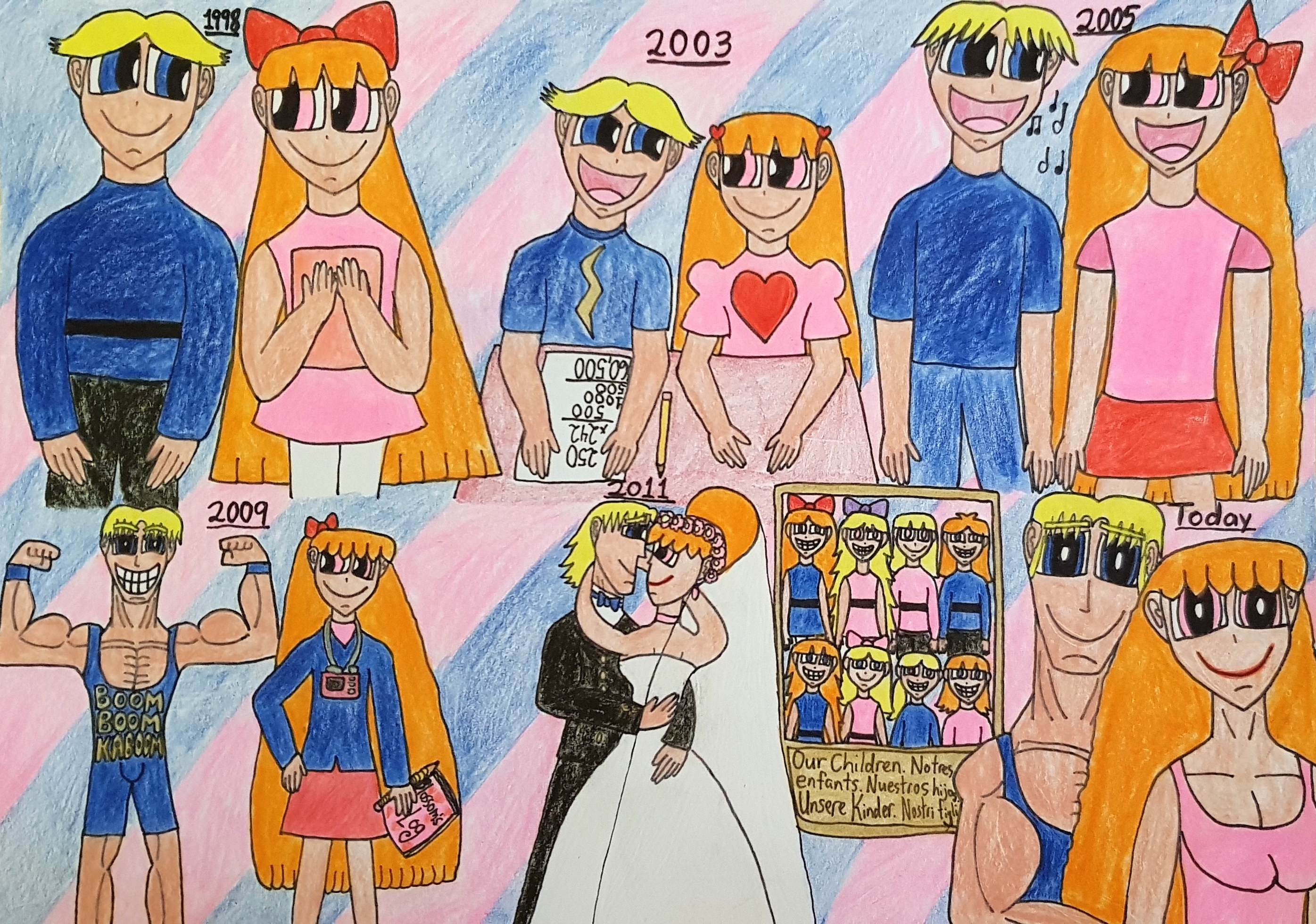