Happy Pentecostal Sunday, everybody. Here’s another piece of Inuyasha fanart consisting of Ginta, Shunran, and their offspring.

My little story behind Ginta and Shunran being together goes something like this. When Ginta, Hakkaku, and Kouga first met Shunran and the rest of the Panther Devas, it was not a most promising start, as they got themselves into skirmishes in courtesy of their insurmountable power. However, Ginta took notice of one of the Panther Devas who specialized in creating cherry blossom-induced mirages and whose notable trait was her giggling, Shunran. At first, her giggling and her mischievousness were a slight nuisance, but after seeing what she can do as a fighter, Ginta was rather interested.

One day, when Shunran, Karan, Shuran, and Toran were about to head home, Ginta called Shunran’s name and at first, he was hesitant to speak up. That was until Shunran smiled at him and told him that he was a funny person and would like to get to know more about him. With this remark, Ginta blushed but plucked up the courage to ask her on a friendly date by the lake. She reciprocated the offer and on the very next day, they finally told each other how they felt. Ginta opened up to tell Shunran how much of an amazing fighter she was, how nice her cherry blossoms smell, and how much of a fun-loving person she was, and Shunran proceeded to tell Ginta how much of a hilarious gentleman he was, how kind and considerate he was when they were talking to each other. They looked at each other in the eyes and realized who they were truly looking for, as if though it were love at first sight.

By the time they consummated their feelings they even encountered Inuyasha and Ayame who in turn were in a relationship. Inuyasha and Ayame remarked that Ginta and Shunran make an adorable couple. Moreover, they decided to become a four-person team, defending Japan against different demons and monsters using their courage, strength, and sturdy teamwork to get the job done. As Inuyasha, Ginta, Ayame, and Shunran became closer as friends, Ginta’s and Shunran’s relationship blossomed even more to the point where Ginta proposed to her. This made Shunran excited and she could not wait to break the news to her siblings.

Shunran hurried back to Toran, Shuran, and Karan and finally spilled the beans about her undying love for Ginta. Her older siblings were initially hesitant. However, they wanted what was best for their sister and wanted to see her happy. Moreover, Karan decided to give the final word and said yes to the relationship, thus having Shunran gleefully embrace all three of her older siblings. Ginta did the same when he told Kouga and Hakkaku about his prospects of marrying Shunran. In spite of Kouga being unsure about Ginta being with Shunran, Hakkaku, being the best friend that he was, happily gave his consent and wrapped him in an embrace. Kouga also gave his consent, so long as Ginta does not make the same mistake he did with Kagome and Ayame by being a two-timer.

A few months after Inuyasha’s and Ayame’s marriage, Ginta and Shunran were happily wed and decided to stay with Inuyasha and Ayame as a unit, thus making Inuyasha akin to an older brother to Ginta and Ayame akin to an older sister to Shunran. With every battle, they did by day, Ginta and Shunran made love to each other by night. Shunran then broke the news that she was pregnant and nine months later, she gave birth to a boy, with tears of joy flowing down her eyes. Ginta was also happy and surprised that he was a father and has made a vow to be forever faithful to his family.

With four more children to add to this family, Ginta and Shunran ensured a positive, loving, and optimistic home life, especially for their children, and it was going to stay that way.

Now that that is out of the way, let’s talk about the children.

As the eldest, Minoru has the responsibility of looking after his younger siblings and leading by example. He has inherited his father’s happy-go-lucky, kind, and caring nature but is also prone to being impulsive and some bouts of anger. He abhors it when anyone tries to hurt not only him but also his parents, his siblings, and his friends, as he will unleash Hell thanks to his super strength and lightning speed, thus making him a competent fighter. He is especially close to his father, as he looks to him because of his good humor and capabilities as a fighter. He also loves his mother’s company, as she is strong-willed and ensures that her dear Minoru does not get into any trouble. He is also close to his siblings, but he is more fond of his sisters Sakura and Kokoro for being great listeners and helping him get in touch with his feminine side, especially when it comes to talking to girls.

Manabu is the kind, caring, emphatic, sweet, and soft-spoken second son and he does get along superbly with Minoru. He likes to spar with Minoru and their father every morning and he also loves to go by the lake for a swim with either his siblings, his friends, or with the whole family. He is especially helpful to Minoru whenever he is in a sticky situation and they have a super strong brotherly bond. In terms of his relationship with his youngest brother, Sentaro, he enjoys playing with him and he comforts him whenever he gets scared. Manabu is very close to both of his parents and is helpful not only with household chores but also with battle plans.

Sakura is the mischievous, spunky, fun-loving daughter. Given her namesake, she has inherited her mother’s abilities to make mirages out of cherry blossoms. Plus, she is passionate about nature and preserving the environment, thus sharpening her powers of making plants, trees, and flowers grow with not only the help of water, sunshine, and air, but also with a wave of her hands to make the seed rapidly grow into any plant or tree. With this ability and knowledge of nature, Sakura has become the family paramedic, thus ensuring her parents’ and her siblings’ health in order to be in peak condition. She also bears a very close bond with her younger sister, Kokoro, as they would have the usual agenda of going to the forest to pick flowers and herbs and helping each others’ nature powers grow further to full maturity with the help of their mother. In terms of her relationship with her brothers, she loves giving helpful advice to Minoru and Manabu on how to pick up girls and be really well-meaning to them and she just loves to playfully tease Sentaro. Sakura is especially close to her mother, as she looks up to her as her greatest mentor of all time.

Kokoro is just as spunky and outgoing as Sakura, as she is also a physically active young lady who likes to spar with her dad above all else too. As much as she is close to her mother, bearing her nature powers and all, she also enjoys the company of her father, as he helps be hands-on with close combat. Much like Sakura, she is also helpful to both Minoru and Manabu when it comes to girls and they enjoy playing with Sentaro.

Being the youngest, Sentaro is the apple of his older siblings’ and parents’ eyes, due to his cheery, energetic, enthusiastic nature. He longs to be like his father, as he wants to be a great fighter like him, and he longs to be like his mother, as she cares a great deal about nature. Even though he loves the company of his older siblings, he will admit that he does not always like to be babied. He’s also a child of nature, as he loves to tend to cute, cuddly animals like rabbits and squirrels as well as spending a great deal of time in the forest.

Well, there you have it, Ginta, Shunran, and the fan children I have for them. I hope you enjoyed this and I wish you a most pleasant summer.

Ginta and Shunran from Inuyasha belong to Rumiko Takahashi.
Minoru, Manabu, Sakura, Kokoro, and Sentaro belong to me. 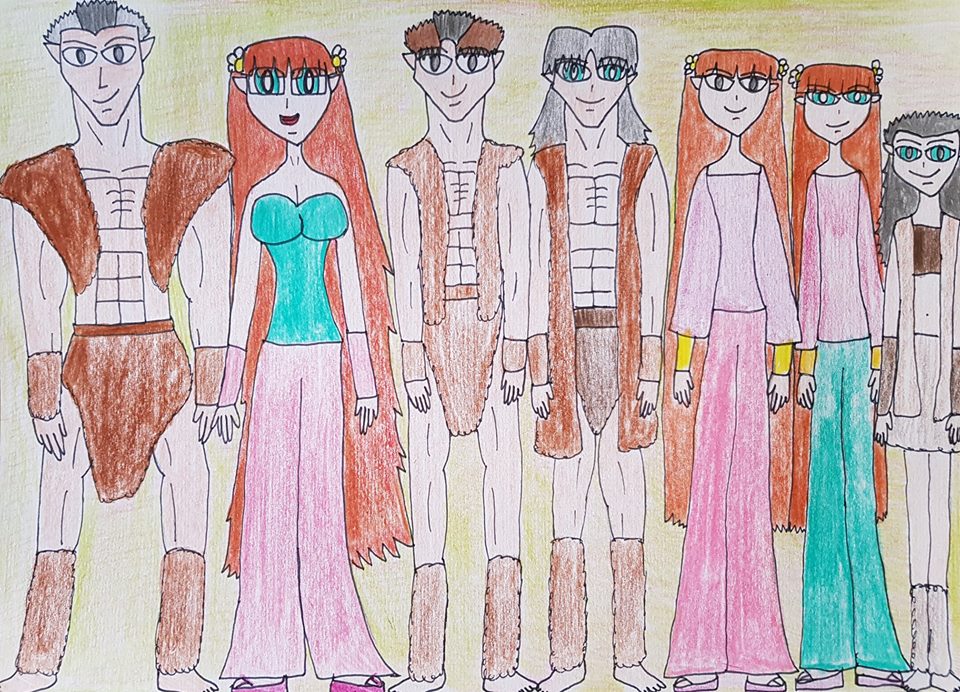